Alec Baldwin is Now Stating He Did NOT Pull The Trigger

He’s saying the gun went off on it’s own. What happened to his comment “Why was I handed a hot gun?”
Talk about a no good lying piece of ****e.

In a preview for the actor’s first on-camera interview since the tragedy, Baldwin says he did not fire the gun that killed Halyna Hutchins

In a preview for the actor’s first on-camera interview since the tragedy, Baldwin says he did not fire the gun that killed Halyna Hutchins​ 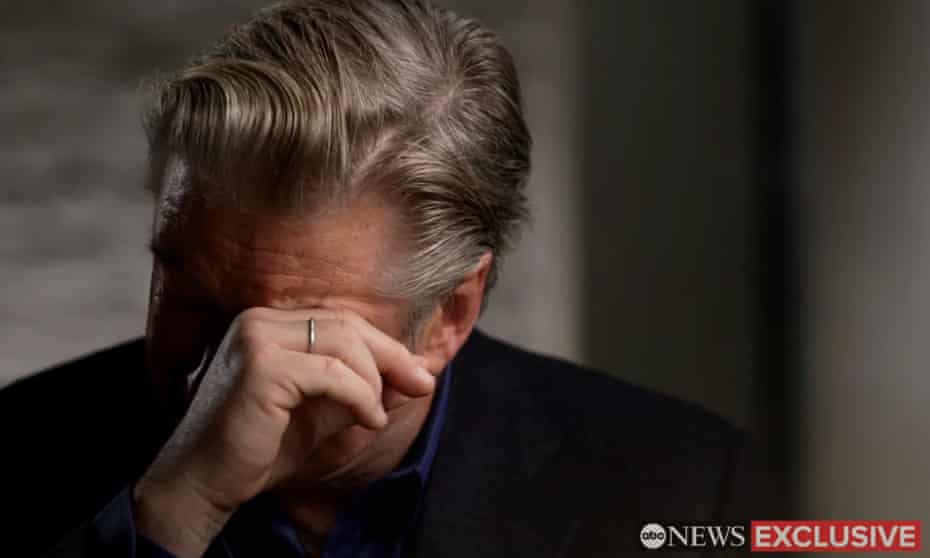 Alec Baldwin on ABC: ‘I would never point a gun at anyone and pull a trigger at them.’ Photograph: YouTube
Alec Baldwin says he did not pull the trigger on the gun that accidentally killedcinematographer Halyna Hutchins on the set of the movie Rust in October.

Hutchins, 42, was killed, and director Joel Souza, 48, injured when the gun Baldwin was holding went off during rehearsals for the western on a ranch outside of Santa Fe, New Mexico – a rare filming fatality that sent shockwaves through Hollywood and has forced a reckoning on the use of weapons on set and cutting corners on production safety.

In a promo for the ABC interview, Baldwin’s first since the tragedy, George Stephanopoulos is shown asking the actor to confirm that it wasn’t in the script for the trigger to be pulled. “Well, the trigger wasn’t pulled. I didn’t pull the trigger,” Baldwin says. Stephanopoulos confirms, “So you never pulled the trigger?” to which Baldwin answers, “No, no, no, no. I would never point a gun at anyone and pull a trigger at them. Never.”

Stephanopoulos, in an appearance on Wednesday morning on Good Morning America, described the 80-minute sit-down as “raw” and “intense”.

The journalist described Baldwin, 63, as “devastated” yet “very candid” and “forthcoming”. The actor “answered every question” and discussed Hutchins, meeting with her family, and his account of what happened on set that day. “I have to tell you, I was surprised in many places over the course of that hour and twenty minutes we sat down yesterday,” Stephanopoulos said.

“I’ve done thousands of interviews in the last 20 years at ABC,” he said. “This was the most intense I’ve ever experienced.”

The Sante Fe county sheriff’s office is investigating the shooting, largely focused on how live rounds, which are banned on set, came to be in the gun held by Baldwin.

According to reports, Baldwin believed the gun was empty. He had been handed the weapon by assistant director Dave Halls, who allegedly called “cold gun” as he passed it over. Weapons on set, including the gun given to Hall, were handled by 24-year-old Hannah Gutierrez Reed, a head armorer juggling her second ever feature gig handling weapons with the job of key props assistant.

Asked how he thinks a live bullet got in the gun, which was supposed to be loaded with blanks or dummy rounds, Baldwin said he had “no idea”.

Baldwin also answered Stephanopoulos unequivocally that the accidental shooting was the worst thing that’s ever happened to him: “Yep … yeah, because I think back and I think of ‘what could I have done?’”

The special, Alec Baldwin Unscripted, will air in the US on ABC on Thursday at 8pm ET, and will be available later on Hulu.

Location
DIXIE - as in The South

Yep….guns just ‘go off’ by themselves all the time ….. in fact, we need to make sure there is none of those rogue guns are running around trying to kill people !

Must have gone off automagically.

He can SAY wnatever dumb **** he wants to. In fact he has been doing that for decades now. However, the dead and the injured person STRONGLY point toward a different set of facts. This latest news is nothing more than a very pathetic attempt at minimizing his involvememt. You know, " Get out in front of this thing" Damage control and whatnot.
Y

He's ****ed. One lawsuit already filed by the guy that was next to the woman that died, and the husband of dead woman retained a personal injury lawyer.

Those damn single actions, always going off on their own.

That new armorer evidently never told by dad
about the load one skip one load 4 principal.
Also she should not leave ammo out in the sun.
Gets hot, load it in revolver, then it just goes off.
Don't take my word for it, just ask Alec.

He is doing what he has been paid to do for years, act and lie.
You must log in or register to reply here.

Throwing out the stupid room sweeping robot. It does not have a **** detector
2 3 4